If rent stabilized tenants in your building are facing a Major Capital Improvement (MCI) rent increase because of façade repair, this State Supreme Court decision might help you.

The state law requires that to qualify as an MCI, work must "depreciable" under the federal Internal Revenue Code. The court ruled that façade repair is no exception - despite what the regulations say.  So the state's Division of Housing and Community Renewal must first determine whether the work done would be depreciable under the IRC.  Regular repair work is NOT depreciable.  To be depreciable, the work must 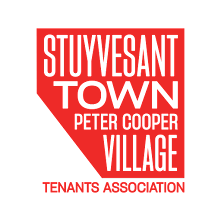 The court issued a very favorable Order and Decision on the TA’s objections to DHCR’s granting of 19 individual Major Capital Improvement rent increases related to Local Law 11 façade work. As you know, we challenged all approved MCIs in a filing called an Article 78, which comes before the court.

We prevailed on the two key issues: failure to file in time and failure to consider depreciability as an IRS standard for work to qualify as an MCI.

at January 27, 2023
Email ThisBlogThis!Share to TwitterShare to FacebookShare to Pinterest

The Design & Function of the 4 Rent Guidelines Boards

Read Michael McKee's authoritative explanation of the design and functions of the Rent Guidelines Boards in New York City, Nassau, Rockland, and Westchester Counties.
Then work with the Rent Justice Coalition to keep future increases low! 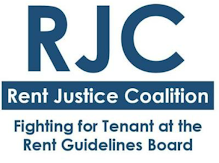 at August 26, 2022
Email ThisBlogThis!Share to TwitterShare to FacebookShare to Pinterest

Albany ended its legislative session in 2022 with mixed results for tenants.

at July 25, 2022
Email ThisBlogThis!Share to TwitterShare to FacebookShare to Pinterest

Landlords shouldn’t be allowed to raise your rent just because they want more profit. The #Right2Remain would help tenants to fight back against landlord greed. Sign the petition to stop the rent hikes! https://right2remain.com/ 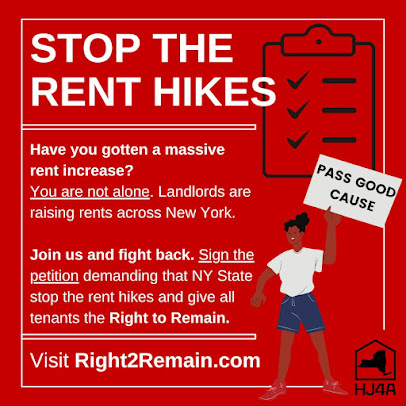 at April 12, 2022
Email ThisBlogThis!Share to TwitterShare to FacebookShare to Pinterest

The management of 50 West 97th Street refuses to offer for rent 9 vacant rent stabilized apartments.  The management is just warehousing them. And that's just one building.

Coincidentally (?!), a group of owners of rent stabilized buildings just offered Gov. Hochul to put 20,000 such apartments back on the market IF the state would roll back some rent protections tenants won in 2019.
So landlords are creating a fake shortage of apartments, and then offering to relieve it if the state will let them double the rents every 5 years by permitting vacancy bonuses again. (In the past, landlords got a 20% increase every time a rent stabilized apartment became vacant. If tenants were harassed out by certain landlords, that could mean a new tenant every year - and that would result in a 100% rent increase without the landlord even having to slap on a coat of paint.)
Tonight the Coalition to End Apartment Warehousing is hosting a Zoom Town Hall about this issue.  Join us!
6:30 PM.
Zoom link: https://us06web.zoom.us/j/83569891685
By phone: 646 558 8656 (meeting ID: 83569891685#)
at April 12, 2022
Email ThisBlogThis!Share to TwitterShare to FacebookShare to Pinterest

The April 1st budget deadline is gone, but some housing remains in the negotiations and tenants state their demands.

Three busloads of activists and organizers from the Housing Justice for All coalition traveled to the state capitol to demand housing policies that benefit the many not the few.

Three busloads of activists and organizers traveled to Albany on Tuesday for a day of action advocating for Governor Hochul’s executive budget to include more funding for affordable housing initiatives across the state.

The activists were part of the statewide Housing Justice for All coalition and listed three concrete demands for the governor and the state legislature to enact: Pass stronger eviction protections, eliminate tax incentives for luxury real estate developers and expand rental assistance for people at risk of homelessness.

Affordable housing plays a big role in Hochul’s budget, along with the Legislature’s proposals. But one notable difference includes the governor’s proposed replacement to the current 421-a tax incentive for developers to build affordable housing. It’s set to expire this year, and Hochul proposed the 485-w program, which made some tweaks to the current tax break. However, lawmakers don’t want to debate the issue as part of the budget. They also have disagreement over converting commercial buildings to housing. Hochul has her own proposal, while lawmakers prefer to focus on expanding and funding the existing House Our Neighbors with Dignity Act passed last year.

at April 02, 2022
Email ThisBlogThis!Share to TwitterShare to FacebookShare to Pinterest

Good Cause Eviction, Housing Vouchers, and more in Albany - Mar. 9

Reproduced from Housing Justice for All email:

As evictions, rent hikes and homelessness rise across the state, our state legislators are sitting in Albany debating solutions WITHOUT us.

So on Wednesday March 9th, we are descending on the state capitol to demand real solutions for renters and homeless New Yorkers.

Join us in Albany on Wednesday!

The legislature and the governor are debating and deciding on next year's state budget right now. And we know that any budget that does not include the right to remain, permanent rental assistance and an end to real estate tax breaks is NOT a budget for the people.

Get on the bus to Albany next Wednesday to demand Good Cause Eviction, the Housing Access Voucher Program and an end to real estate tax breaks!

Fill out this form and we will connect you to the nearest bus pick up and arrange transportation and lunch for the day. We will require proof of vaccination to board the bus.

Our elected officials need to feel our presence in the halls of the state capitol in order to do the right thing. Join hundreds of renters and homeless New Yorkers at the capitol on Wednesday!