Allow evictions for "Good Cause" only!

In major victories for tenant advocates this year, Albany and Hudson made history by becoming the first municipalities in New York to enact “Good Cause” legislation meant to keep residents of unregulated buildings safely housed and to prevent homelessness. With the passage of this legislation, tenants can defend themselves against retaliatory evictions, advocate for repairs, and receive protection against exorbitant rent hikes — making the innovative housing policies adopted in Albany and Hudson the first stop in a campaign to take Good Cause legislation statewide and extend these protections to all New Yorkers.

at October 28, 2021
Email ThisBlogThis!Share to TwitterShare to FacebookShare to Pinterest

Heat Season began Oct. 1st and goes through May 31st. 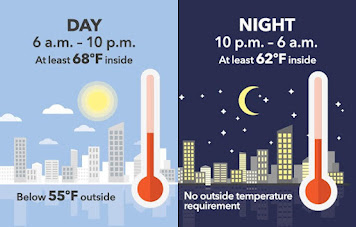 (Illustration from the NYC Dept. of Housing Preservation and Development)

Landlords must provide heat to tenants from October 1st through May 31st each year under these conditions:

Measure the indoor temperature with a digital thermometer in the middle of your room.

at October 25, 2021
Email ThisBlogThis!Share to TwitterShare to FacebookShare to Pinterest

Tenants PAC's Michael McKee sends Articles of Interest to Tenant Advocates.  Get on the email list (scroll down the page to the bottom)!

GOOD CAUSE EVICTION (Eviction only for good cause)

Nick Reisman: Gov. Hochul announces that the state has settled the long-standing lawsuit over funding for public schools (NY State of Politics)

Note:  The current requirements for a legal basement apartment might not have saved the 11 who died in Hurricane Ida.  Those requirements protect against fire, rather than flooding - which would be helped if tenants had egress to a higher floor.